Contest is the first novel ever written by Matthew Reilly. It follows radiologist Stephen Swain as he finds himself forced to participate in the ancient alien contest known as the Presidian.

The New York State Library. A silent sanctuary of knowledge; a 100-year-old labyrinth of towering bookcases, narrow aisles and spiralling staircases. For Doctor Stephen Swain and his eight-year-old daughter, Holly, it is the site of a nightmare.

For one night, the State Library is to be the venue for a contest. A contest in which Stephen Swain is to compete - whether he likes it or not. The rules are simple: seven contestants will enter, only one will leave.

With his daughter in his arms, Swain is plunged into a terrifying fight for survival. He can choose to run, to hide or to fight - but if he wants to live, he has to win. Because in a contest like this, unless you leave as the victor, you do not leave at all.

A few weeks before the main story begins, Dr. Stephen Swain managed to fight off two gang members (who were searching for a police officer who was working undercover) despite having no combat experience, and was forced to kill one of them with a gun.

In the early hours of the morning, Mike Fraser, a young thief looking to steal computers from the New York City Library, is cornered by Terry Ryan, a security guard at the library. However Ryan is killed by an unseen creature, and a blood-covered Fraser is traumatised by what he has seen. After the scene is discovered the next day, the library is closed down, but until a forensics team can assess the scene the following day, two officers, Christine Parker and Paul Hawkins, are left to guard the library overnight.

After picking up his young daughter Holly from school after she got in a fight with a boy who called Swain a murderer, Swain heads to the police station to finalise his statement with Captain Henry Dickson about the incident in the hospital. Shortly after he returns home, Swain and Holly are suddenly enveloped in a bright sphere of light, and are teleported into the New York Library.

A mysterious alien named Selexin explains that Swain has been chosen to represent humans in an intergalactic contest called the Presidian. The rules are simple: seven beings representing the seven different intelligent races of the universe are teleported into a labyrinth (in this case, the Library) and must kill each other. The last one standing must then find the teleporter that will take them out of the labyrinth. However, an alien beast called the Karanadon is also in the labyrinth, teleported in a day before the contestants were. Swain has been chosen to represent Earth because of his natural adaption abilities (as demonstrated in the gang fight), as in the previous two Presidia humans were selected with no more than fighting skill and were quickly eliminated.

Selexin's species is too small to compete, so they serve as guides and witnesses to a kill. If a contestant says "initialize" a tiny teleporter will appear from a cap on Selexin's head, allowing officials to see what is going on. Clasped to Swain's wrist is a metal band that indicates how many contestants are in the Library, as well as whether the Karanadon is awake or not. As final a precaution in the game, the whole Library is enclosed in a powerful electrical field. If Swain were to somehow get out of the Library the band will give him fifteen minutes to get back inside, and will explode if he fails to do so.

Meanwhile, seeing a light down in the stack, Hawkins goes to investigate, leaving Parker alone in the Lobby. Soon after he leaves, the Malonian contestant, Bellos, appears in the lobby, though his guide is mysteriously unconscious. Bellos initially mistakes Parker to be another contestant, however when he realises she is not, he has a small number of unknown creatures kill the officer.

Down in the stack, Hawkins encounters a dinosaur-like alien named Reese, who hypnotizes him with her antennae. Before she can kill him, Swain intervenes (the contestants cannot harm each other until all seven are in the library) and leads Hawkins away. However, Selexin points out that while contestants cannot kill each other at this stage of the contest, they can follow each other. Pursued by Reece, Swain, Holly, Selexin, and Hawkins flee into the parking garage, only for the final contestant, the Crisean Balthazar, to appear, allowing the Presidian to commence.

In the ensuing fight, Reese injures Balthazar since he is the stronger opponent, but Swain, against Selexin's advice, attacks her and drags Balthazar to an elevator which the group uses to get away from Reese. Swain refuses to kill an injured being, and while he is unable to understand the other contestant, his attempts to help Balthazar communicates his desire for them to form an alliance, despite the protesting of Balthazar's guide.

The group tries to regroup in the lobby, but spy Bellos and another contestant called the Konda facing off. Just as the Konda is about to kill Bellos, his hunting animals, called Hoodayas, or Hoods, attack and kill the Konda. Selexin and Balthazar's guide say that the Presidian is over; Bellos has cheated by bringing in the hoods, making him an invincible opponent and the definite winner. Having been aware of their presence, Bellos sends his Hoods after the group, but luckily Reese, who has figured out how to work an elevator, appears and the group flees as the Hoods attack her instead.

Unfortunately, they have stumbled upon the Karanadon's nest. The creature wakes, and kills Balthazar's guide before Swain tricks it into falling down an elevator shaft, knocking it out. While they have been separated from Balthazar and Hawkins, Swain, Holly, and Selexin find the door that Fraser had left ajar to facilitate his escape. Since the door was not closed, it is not electrified, thus affording an escape from the library, but of course the band on Swain's wrist prevents him from leaving. Before they can figure out their next move, Bellos arrives and has his Hoodaya attack. Swain manages to kill two of the Hoods, but in the scuffle the door slams shuts with him outside, and with the door now electrified, he is trapped outside, alone, and with his wristband counting down.

Complicating matters, the NSA's Sigma Division has arrived and cordoned off the library. The Sigma Division, headed by James Marshall, is a branch of the NSA which is dedicated to attempting to locate alien technology. They have detected several huge energy surges in the city (caused by the teleporting), and while they have successfully pinpointed the library as their target, they are awaiting the arrival of a team that will find a way into the library and attempt to capture any alien beings inside. Just as Commander Harold Quaid and his team arrive to assess their options, Swain manages to get close to the library and use a magnet in a phone to create a gap in an electrical field, allowing him to get back inside.

Meanwhile, Hawkins and Balthazar have taken cover in a janitor's closet, but they are attacked by a contestant called the Codex. Balthazar, though partly recovered, struggles with the Codex, and yells for Hawkins to flee, just as the combustible materials in the room ignite, killing the two contestants and starting a fire. At the same time, Holly and Selexin have managed to escape the stack. Bellos soon finds them and chases them, killing the remaining contestant, the Rachnid, in the process. While Holly and Selexin manage to escape and kill one of the Hoods, Bellos finds Hawkins soon afterward and kills him.

While searching for Holly and Selexin down in the parking garage, Swain encounters Quaid and another agent who have managed to get into the Library during a brief opening the Sigma Division managed to achieve. They are suddenly attacked by Reese, and the two NSA agents are killed, while Swain manages to fatally electrocute Reese. While searching the agents' gear, Swain finds a paper in Quaid's pocket listing the power surges from every moment something was teleported into the Library. Soon, he finds Holly and Selexin just as they are cornered by Bellos' final Hood, and uses Selexin's cap-mounted teleporter to kill it, by teleporting half of its body away to Presidian officials.

Bellos confronts the trio, and is unconcerned with the possibility that his cheating may have been discovered (during his earlier encounter with Holly and Selexin, he told them the hoods would be long gone from Earth before any investigation following the Presidian could discover them, despite there being no teleporters on Earth) and attacks Swain in the elevator. Though he is far outmatched, Swain used a chemical reaction caused by fluorine in the light tubes and Hawkin's pepper spray to injure Bellos before they end up on the floor of the elevator shaft. Once he has Selexin press the down button further, the far larger Bellos becomes pinned to the elevator floor thanks to his horns, and is then crushed beneath the elevator.

Though he may be the last contestant standing, Swain's wristband tells him that, because the Presidian has been "contaminated" because of the Hoods, it has now been cancelled. Additionally, the final teleporter will not be opened, and so everything, including Selexin and the Karanadon, will be left behind, while the electrified field will be dropped. As he recognises they are at risk of being caught by the Sigma Division agents outside, Swain suddenly remembers Quaid's list, and from the data he realises that Bellos had teleported a teleportation device into the Library, so that at the end of the game he could send the hoods away, and not be discovered cheating. Using it, they can send Selexin home. Once they find the teleporter, Selexin departs (with the intention of having the escape device teleported back to keep it from being discovered), but not before he commends Swain on his survival and apologises for underestimating him.

Moments after Selexin leaves, the electrical field around the Library drops, and the wristband begins its countdown sequence in order to dispose of the evidence. The Karanadon awakes and begins chasing Swain and Holly as they flee to the exit, just as most of the Sigma Division agents move in to the Library. In the fighting, Swain's band gets knocked off thanks to the Karanadon's impressive strength, and, free of the threat of being blown up, Swain clips it to the Karanadon. Swain and Holly rush into the park outside, and managed to evade the Karanadon long enough for the countdown on the band to expire, blowing up the Karanadon. The bands on the deceased contestants go off as well, causing several explosions that destroys the Library and kills several of the NSA agents still inside.

Their ordeal over, Swain and Holly head home on the subway, while Marshall is left with almost all his people dead and no proof of alien contact. The only evidence that remains of the Presidan is a pair of handcuffs that remain latched to the subway track which Swain had used to keep a Hoodaya in place so that a train could crush it. 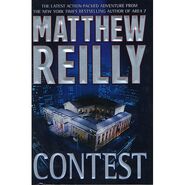 Add a photo to this gallery

Retrieved from "https://matthewreilly.fandom.com/wiki/Contest?oldid=10677"
Community content is available under CC-BY-SA unless otherwise noted.